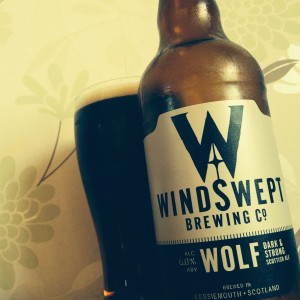 Wolf is a “Dark And Strong Scottish Ale” and it’s quite nice.
But that’s all.
It’s a good looking deep leathery red, but it’s a struggle to discern any real aroma save for the subtlest hint of raisins and a little bit of biscuit.
Taking a drink you get a big hit of raisins and sultanas along with some stewed apple, a pinch of digestive biscuit and some toffee at the edges.
The hops are uninspiring.
In fact they are so uninspiring that they don’t warrant any real description.
They are just ever so slightly hoppy – a grassy bitterness, but that’s about all.
All this makes for a rather one dimensional beer that I’ll happily finish but won’t bother to look for again.