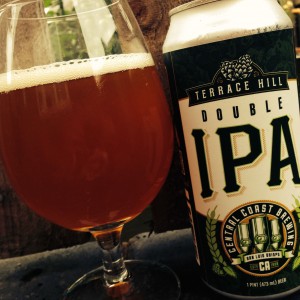 Want even more proof that canning beer is a good idea?
Try this pint can of Terrace Hill Double IPA.
The intensity of the smell as you pop the cap is extraordinary.
It’s a massive blast of intense resinous fruity goodness.
The malting is sticky and chewy, all caramel coated toffee finger biscuits, and there’s a hint of whisky in the background.
Did I say a hint?
I meant an enormous thwack to the skull.
But it’s not a burn in any way, it’s a deep chest warming heat and it’s lovely, if slightly brain melting.
As for the hops, well, they’re super fresh pine resin, slices of grapefruit and brown sugar, lemon rind and redwood bark that glues itself to you and refuses to leave.
A bit like a beery Super Glue.
In the main though, it’s the freshness of this new wave of canned beer that I can’t fault.
I still prefer the aesthetics of the little brown bottle, but the flavour of modern beer in a can simply can’t be argued with.