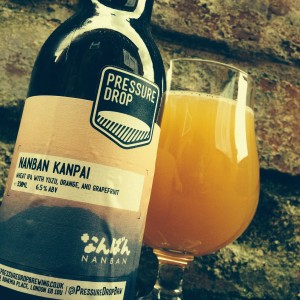 This is a Wheat IPA made with orange, grapefruit and yuzu (an East Asian citrus fruit), and it’s a big blast of super fresh fruit in both flavour and aroma.
In fact I have to admit this this is a rather amazing beer, even if it did feel and look a bit flat when I first poured it.
But there’s just (only just) enough fizz to make the beer pop and sparkle on your tongue while the honey and wafer biscuit of the malts create a soft pillow on which you can relax before you succumb to Death By Citrus Beauty.
Massively sharp almost-sour blasts of orange rind and grapefruit juice combine with an aftertaste of bitter mandarin from the yuzu to leave you with a crisp, dry and almost everlasting finish.