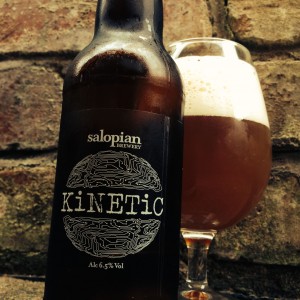 I first had Kinetic from cask at the Birmingham Beer Bash and it was pretty much the beer of the day.
Jake at Salopian told me he prefers the bottled version and I have to agree with him as bottling seems to have condensed the flavours, made them bigger and bolder.
Kinetic is a super charged Golden Ale brewed with fresh lemons and limes.
Loads of them.
It’s a beer that smells of honey coated peaches and citrus fruit, a beer whose malts are sticky with toffee, crunchy with biscuits and lightly spiced by its yeast.
The hops are spiky, crisp and bitter.
Grapefruit and kiwi, basil leaves and dandelions.
Under this the lemons and limes squeeze their juicy fresh zesty goodness all over your face and make Kinetic a beer of beauty.