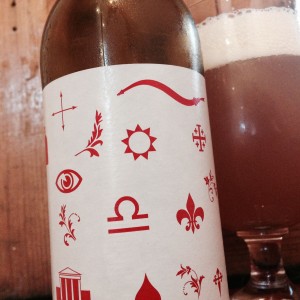 This beer is a bit weird.
It’s made with a single malt, two hops (Amarillo and Tettnanger if you’re wondering) and three yeast strains, and on top of that pomegranate has been added just to make sure everything is extra tart and dry.
The result is an aroma that has a gin clear sour fruitiness that leaps up at you while the golden beer slouches in your glass with its big fluffy head.
The flavour of Grenadier is somewhere between Belgian Blonde and Lambic with bitter green apple skins, fudge filled brioche and lip witheringly sour pomegranate flesh.
All in all it’s an odd combination and one I wasn’t expecting when I opened the bottle, and it certainly won’t be to everyone’s liking, but I found it strangely drinkable.