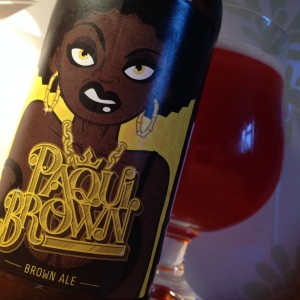 The joys of cultural diversity.
And the problems we find when a little piece of one culture doesn’t translate into another.
I received a message from Tyris about this beer and was told that Paquita Brown, “[…] is a local Spanish name,” which they have shortened to pay tribute to Quentin Tarantino’s Jackie Brown.
This in itself is fine, in Spanish.
In English however, Paqui Brown has a completely different meaning which I’m sure I don’t have to spell out to you.
It’s a meaning that makes the name of this beer totally inappropriate in the UK in the Twenty First Century.
And I’d go so far as to say that it’s so inappropriate that someone – The Brewery themselves, their wholesaler, the importer, whoever – should have addressed this before allowing it to hit the shelves (albeit electronic shelves) of the UK’s beer shops.
As it goes, the beer isn’t great.
It pours a weak amber orange – Surely a Brown Ale should be, um, brown?
The smell is a lightly farty cabbage and tamarind, and the malts are a watery biscuit and toffee which are coupled with almost nonexistent hops.
So, does Paqui Brown have anything going for it?
The label art (ignoring the name) is rather good, but personally I think Tyris have got this really wrong.