Things are changing in the beer world.
Things have been changing slowly for some time, and the shift in the UK from the idea that good beer has to be “Real” to the acceptance of good beer for good beer’s sake has become tangible.
Highlighting this shift is the growth of Craft Beer festivals.
I use the word Craft with a bit of a sigh as it’s a word I have a lot of problems with, but I suppose we need a catchall and that’s as good as any. 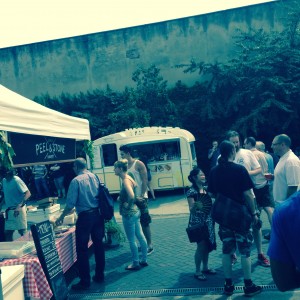 A few Saturdays ago (July 26th) I attended the second Birmingham Beer Bash – or #BCubed – organised by a bunch of beer bloggers who were sick of the tired old formulaic beer festivals on offer around the Midlands and decided to do something about it.
Held at The Bond Co., a superb venue at the side of the canal, a central courtyard packed with award winning street food vendors leads left and right into renovated warehouses with racks of casked and kegged beer.
Unlike many festivals this is a ticketed event, meaning you don’t find any large queues at the bars and you’re unlikely to find you’ve missed out on any of the beers that you might want to try.
It’s a good model – Nobody gets grumpy, everyone drinks what they want and the atmosphere is anything but stuffy.
There are a lot of beards in the world of Craft Beer though.
The Craft Beard Movement perhaps?
But that’s for a different publication. 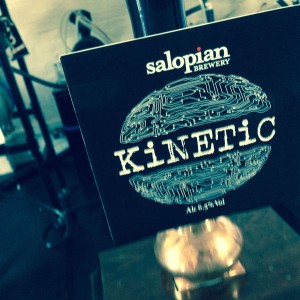 So, my day started with a hot and stuffy train journey into Birmingham with a couple of friends and we arrived in glorious afternoon sunshine to find the Bond Co. buzzing with happy chatter.
It was lunchtime and so having grabbed a quick glass of appropriately named Beerd Razor IPA (5.9%) (Just to get my eye in you understand), I stood in a short queue to buy some rather delicious sausages and immediately struck up conversation with the couple ahead of me.
They had travelled over from North Wales having read the stunningly positive reports (some of them from me) about last year’s inaugural #BCubed and they were not disappointed with what they found.
I caught up with a few friends – both real life and online people I’ve gotten to know through the world of beer writing – and made my way over to the cask bar as I’d heard there was a new beer from Salopian Brewery on offer.
I’m a big fan of Salopian and Kinetic, a six and a half percent Golden Ale brewed with fresh lemons and limes, was a jelly sweetie fuelled sherbet bomb of hoppy goodness.
This was going to be hard to beat, and by the end of the afternoon was easily my favourite beer of the day.
While I was near the cask bar, and having just had my usual friendly mickey taking conversation with James the brewer, I decided to try New Dawn (4.1%) from his recently established Axiom Brewery.
It was a decent Pale Ale, all straw and sunshine, and as a first brew it bodes well for this fledgling concern. 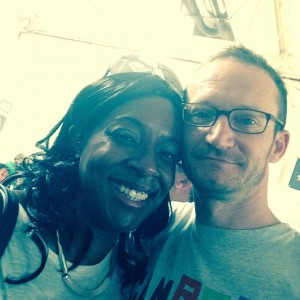 It was at around this time that I bumped into Marverine Cole (@BeerBeauty), TV presenter and Beer Sommelier, we hugged and laughed and had a quick catch up before she explained to me she is working on an idea for a television show about modern beer.
I of course offered my services, never having been frightened of thrusting myself into the limelight, and suggested a beautiful black woman and a skinny middle aged white bloke would make for a televisual feast for the massive audience the show would surely attract.
We decided McCartney & Jackson’s “Ebony And Ivory” would be a suitable theme tune and danced while humming loudly, much to the confusion of those around us.
Then it was time for Squidy. 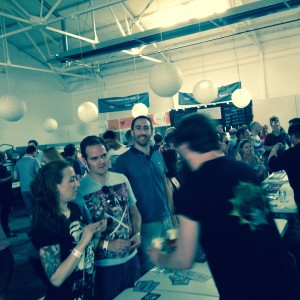 Craft brewers are always trying to push real or perceived boundaries and Hardknott Brewery seem to find boundaries to push that nobody else has noticed.
Squidy (3.8%) was brewed especially for #BCubed and is a Pale Ale with squid ink.
Yes, you read that right.
It’s an odd beer.
It plays tricks on you.
You see, the squid ink doesn’t add anything to the flavour, but it makes the beer as black as pitch and gives it a perfectly white fluffy head.
This means that as you lift it to your lips you’re expecting a big malty coffee and toast Stout experience that confuses your tastebuds because when you get it in your mouth it’s a straightforward crisp and clean Pale Ale.
An interesting experiment, I’m glad I tried it but I won’t be rushing back.

By now the afternoon session was moving on apace with conversation flowing between friends and brewers, I had to stop for a bit of a sit down.
I caught up with my friends over a glass of Off Beat Brewery’s Jumping Juniper Rye (5.2%) – I’m a sucker for a Rye Beer and this one was particularly good with the junipers adding a super clean edge to the meatiness of the malts – We discussed how good it was to see brewers at the event.
All of them approachable, and all eager to talk about their beer while getting slowly sozzled along with everybody else. 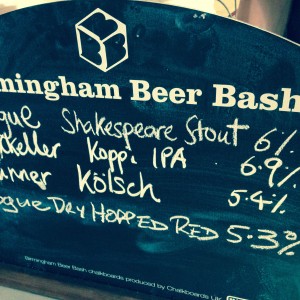 Eventually the afternoon began to get so hot that we decided to move from the now stuffy warehouse rooms and out into the sunshine.
I decided to take a glass of Hardknott’s Rhetoric 3 (12.5%) with me and it split opinion.
It’s a Barley Wine brewed with pink peppercorns and jasmine tea and while I found it delicious, one or two people thought it tasted like cough medicine.
(It did a bit, but in a good way).
This was followed by a Mikkeller Koppi IPA (6.9%) from the International Bar as I was flagging and needed a pick-me-up.
Koppi is a big hoppy IPA made with loads of coffee beans and it acted as a rocket boosted kick in the pants.
Brilliant.
Just what I needed.
By this point we had less than an hour of our afternoon session to go and so I grabbed a glass of Magic Rock’s Bourbon Aged Bearded Lady (10.5%) and a glass of Marble’s Decadence (8.7%).
Both similar Imperial Stouts, one barrel aged, one not.
It was a simple test f my taste buds after a day’s drinking.
The Magic Rock beer won hands down.
Bigger, thicker, richer, it had everything I’d want to finish of a session. 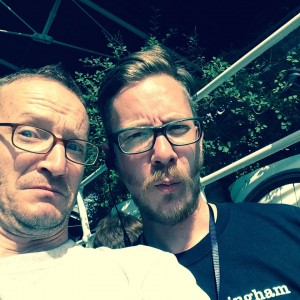 Before we got kicked out I caught up with one of the organisers.
Both David (@OthertonAleman) and Dan (@mediocre_dan) were hyped up and excited by what they had achieved for a second year.
I congratulate them on an excellent event.
The balance of fabulous beer on offer, kept well and presented beautifully, the super food available, and the whole easy going atmosphere of the venue itself made for an absolutely brilliant day.
If you can make it next year then I suggest you book your tickets.
This is how beer festivals should look and feel.
This is how beer festivals are beginning to look and feel, events where the focus is on the people drinking the beer and what they think, rather than the prescriptive nature of the festivals of old where the beer is something to be overly serious about, to venerate and to be sipped in order simple to tick off a list.
And with events cropping up in Manchester, Glasgow and London, and with the rise of the #Twissup as an even less formal type of gathering, you can be sure that if you decide to take part you’ll find a bunch of likeminded souls all happy to have a friendly day while they get slowly beery.

One Response to B’ing Cubed: The Birmingham Beer Bash 2014