Posted on September 5, 2014 by Simon Williams 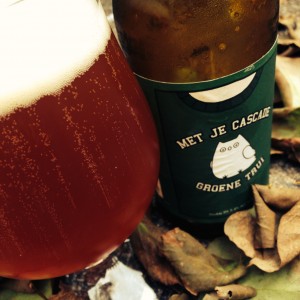 It was in reply to my last review of a Het Uiltje beer that I was told that this brewery and its brewer were definitely worth watching out for.
And boy were they right.
Met Je Cascade Groene Trui (which translates something like, “With your cascade green sweatshirt”) is a brain numbingly brilliant Double IPA.
Its aroma is deep and rich and thick with pine resin and brandy and jelly sweets and what’s more, it smells so fresh you just can’t help yourself but take a swig.
Ad when you do the world explodes, everything changes, plates fall to the ground unbroken, politicians die.
Or put another way, this is the best IPA I have had for some time, wiping the floor with everything in its path.
The malting is gloopy brandy snaps, bruised apples and bran flakes, and the hops – Cascade I’m guessing from the name – are sticky with redwood sap, orange juice, limes and grapefruit, sherbet exploding over peach fuzz and kids’ sweets laved with hard liquor.
In writing I admit it doesn’t read that world beating, but try it, it’s the balance, the way that it all hangs together that makes this one very special beer.