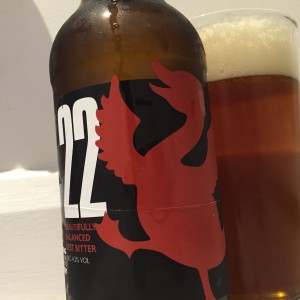 Um.
22 is a Best Bitter that smells rather unpleasant.
It’s a nasal hair scouring weirdly chemical yeasty smell.
Initially the flavour is OK.
Very thin, but OK.
There’s some toffee and biscuits, a dab of marmalade and some green herbal lemony hops.
But everything is so watery and fleeting that it’s instantly forgettable.
And even the little lick of aniseed in the finish doesn’t change the yucky smell.
After a few mouthfuls it went down the sink.