Posted on September 2, 2014 by Simon Williams 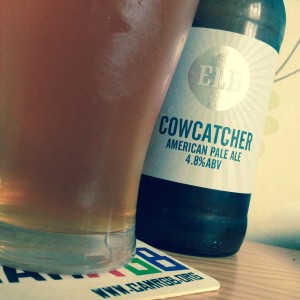 Cowcatcher is an, “American Pale Ale generously hopped with Amarillo, Chinook, Simcoe and Citra,” and that in itself is no bad thing.
But there’s a problem.
It’s not an uncommon problem actually, but it’s a problem nonetheless.
Think about the American Pale Ales you like the best, the ones made in America.
They have that solid sweet and biscuity backbone to offset the bitter hoppy onslaught.
Quite often, and it appears to be the case here, English brewers don’t seem to worry about the malting and instead simply concentrate on slamming as much hops in as possible in order to make their American style Pale Ale.
The result is Cowcatcher, a beer with a washing up liquid lemon odour that pinches your nose, and a bitter-bordering-on-sour, astringent, one dimensional citrus slap in the face that within a couple of mouthfuls, even for a hophead like myself, becomes totally undrinkable.
Cowcatcher went down the sink.