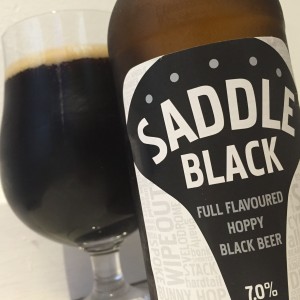 I rather like this, though it didn’t begin too well.
Pouring a good deep black I could barely detect any aroma, save for a gentle waft of toffee and liquorice.
I suppose I was expecting that Black IPA floral perfume thing, but then I’m not absolutely convinced that this is a Black IPA.
Sure, it’s a black beer with lots of hops, but it’s not heavy on the chocolate and toast flavours as you might expect.
There’s treacle and a little charred bread, but there’s also a lovely big earthy meatiness from the addition of rye, some good peppery spice and a nice honey sweetness.
And rather than using the big floral fruity hops you would usually associate with a BIPA, here they’re herbal and sharp, nettle tea and lemon rind, dandelion and burdock which leaves a little aniseed hit right at the end.
So if this is Purity’s take on a Black IPA then it’s a very individual approach and it’s very good indeed.