A Head In A Hat Brewery Fairy Feller’s Master Stroke (5.5%) 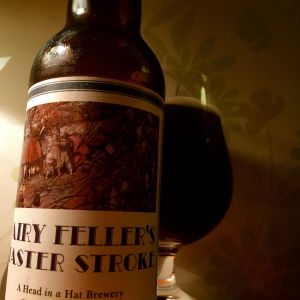 I have to admit to writing and rewriting my notes for this, scribbling out what I’d written and then changing my mind again.
I just couldn’t decide what I thought of this beer.
Eventually I settled on being disappointed.
Listen.
Fairy Feller’s Master Stroke is a crowd funded beer brewed with “Chestnut flavour,” and the chestnuts (natural or artificial, you’re not told which) take centre stage.
The aroma is big and woody and intense, and there’s bags of nuttiness in the flavour too – though not real nuts, you understand, the label being all clever about how no nuts are used in the beer – does this mean that it’s artificial flavourings or does it mean the brewers are assuming that chestnuts are not nuts and therefore people with nut allergies can drink this brew? The answer to that, it seems, is that chestnuts are nuts but they don’t appear to cause the same allergic reactions as, say, peanuts (yes folks, for once I’ve done some research).
The thing is, after your first couple of mouthfuls have made you think, “ooh, this is nutty,” it all gets a bit much, the chestnut flavour totally overwhelming anything else in the beer, making this a singularly one dimensional experience.
Oh, and Siegfried Sassoon will be turning in his grave over the terrible spelling of his name too.

3 Responses to A Head In A Hat Brewery Fairy Feller’s Master Stroke (5.5%)