Something happened when I was drinking this beer.
Something fundamental that I need to share.
It’s in no way self aggrandisement or big headedness or whatever you might think, but after quite a long time of writing about beer and being told by a few people that I have a decent palate, but being unsure of whether or not what I’m saying is absolute pants, I drank this beer and realised that actually my taste buds aren’t too shabby.
You see, I got this bottle of beer in a mixed case and as some of you already know I don’t go in for doing much research before I try a beer as I’d rather come to it cold and let it speak for itself.
And this time I’m really glad that I did because as you’ll see from the review below (which I’ll print here without any editing from my notes last night) I guessed that this beer must have been aged in red wine barrels even though the label doesn’t inform you of such.
And so I Googled the beer and found this:

OK, in the grand scheme of things it’s not the hardest spot to make, but it really did help me feel more confident in what I say about beer.
It was one of those landmark moments in my beer journey, akin to the first time that I could honestly say I had correctly recognised which hop had been used in a brew.
Not earth shattering, but important to me. 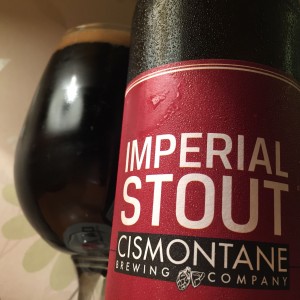 Cistamone Brewing Co. Black’s Dusk (8.5%)
Oops.
This being an Imperial Stout I opened it shortly before my bedtime.
And then, once I’d poured it and taken my first sip I read the ingredients.
This Imperial Stout is brewed with coffee.
So I may be awake for a little while longer.
Black’s Dusk is a beer with a big fruity aroma, all plums and prunes in brandy, and it sits a dense dark ruby red in my glass.
There’s no mention of barrel ageing on the label, but there are certainly things going on in here that would suggest that it has been.
You get a tongue drying red wine tannin mouthfeel, a damp woodiness and a light mushroom fug over some lovely black cherry and red grape juice.
And there’s there’s a big hit of port and peaches, treacle, rum and raisin from the malts, along with a crispy dry redwood and hedgerow hopping that adds a super bitterness that cuts across the gloopy booziness of this beer’s heart.
This is a lovely beer.
I wonder if it is barrel aged?