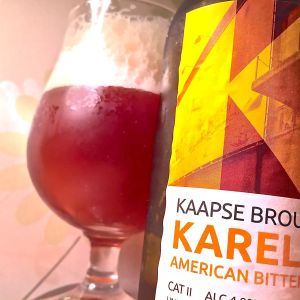 Where Kaapse’s Black Rye IPA, BEA, was absolutely lovely, Karel – their American Bitter – is absolutely average.
There’s nothing wrong with it per se, and in fact it’s perfectly drinkable.
Simply put, it’s pretty uninspiring.
It smells of caramel and lemon rind and its malts are toffee and biscuit.
There’s that definite hit of Citra from the hops, a little resinous woodiness, and that about it.
After BEA I was expecting a whole lot more.