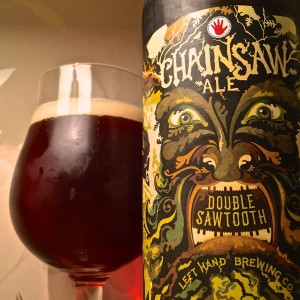 What the hell is this?
Barley Wine?
Not really.
Imperial IPA?
Nope.
Double Sawtooth is a Double ESB.
At least that what it claims to be, and if there is such a thing then why haven’t I been drinking this forever?
And if Double ESB is the next Double IPA then please can everyone start making it so that I can drink it forever.
Because this is ace.
Mental, but ace.
Pouring a deep amber, the aroma is bruised apple cores and white rum.
The malting is yeasty bread dough, sticky toffee and brandy snaps, and the hops are a shed full of woody herbs – think thyme and rosemary – glued to a fence post with pine resin wood varnish and then smeared with orange marmalade.
And then there’s liquorice and biscuits, rum, raisin and just a hint of capers as the beer finishes all dry, bitter and crisp.
And just to make this ber extra mental, Double Sawtooth is delivered in a beautifully packaged eye-crossing 650ml bottle.