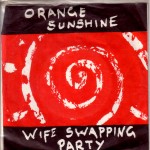 Orange Sunshine was a rather potent form of LSD in the 1960’s.
It was also the name of a little known Blackpool based psychedelic rock band á la Butthole Surfers in the 1980’s who recorded a superbly noisy 7″ on the Stuffed Cat label called Wife Swapping Party, the B-Side of which was a cover of the theme to Prisoner Cell Block ‘H’, and a cassette album called Bring On The Coincidancing Horses (Jeez, my brain is full of some useless information). 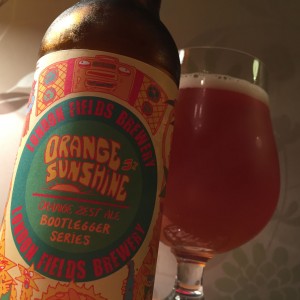 London Field’s Orange Sunshine, on the other hand, is neither trippy, noisy nor particularly impressive.
It looks alright, sitting a rich orange in my glass, but there’s little to no orange flavour for a beer made with orange zest.
The smell is a bit dirty, barley sweets and compost, and the whole thing tastes thin and insipid, losing any discernible malt and hops character and leaving you with a slightly unpleasant acidic bitterness.
Sadly, that’s two beers into London Fields’ Bootlegger Series and neither of them have been any good.