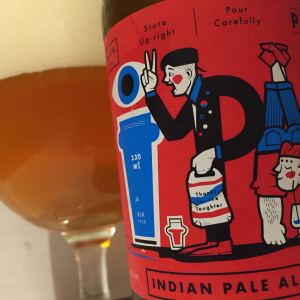 This may not be Partizan’s best IPA (though it’s still pretty good), but I love it for no other reason than the sentiment of its label.
You see, this IPA is Partizan’s tribute to Rik Mayall, and it’s a beautifully gentle tribute at that, with one of the characters resembling Rik circa The Young Ones and the other crying while sporting a forehead full of metal studs á la Vivian (played by Rik’s sidekick and close friend, Ade Edmondson).
And so to the beer.
It smells of fruity sweets and flowers and there’s a decent caramel wafer malt to chew on while the hops are sharp and snappy, satsuma skins and jelly sweets.
But there’s an alcohol burn that taints what should be a long dry finish.
Still, the sentiment is lovely.
“Thanks for the laughter”.
Indeed.