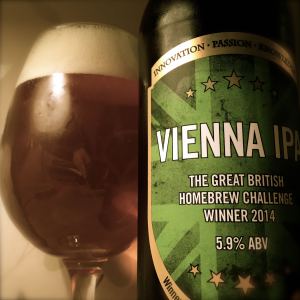 Brewed by Graham Nelson at Thornbridge after he’d won the 2014 Great British Homebrew Challenge, this is an IPA with Citra and Ahtanum hops and Vienna malts.
And it’s alright.
I’d be interested to know if this is exactly like the beer that won the competition because this scaled up for general sale version has the sugary backbone that I tend to find in all Thornbridge beer is present here and it makes everything far too sweet for my personal taste.
The Citra jumps out at you in the aroma and there’s some creamy honey doused wafer biscuits from the malt, but everything is coated in a sugary syrup.
Perhaps it’s just me as everyone else seems to really dig Thornbridge and I find just about all of them have a sickly finish.
But with all that said, this is still miles ahead of ninety nine percent of the beer currently available on a supermarket shelf.