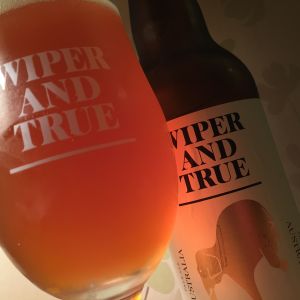 I’ve only just noticed that Wiper & True brew at Cheddar Ales (itself a brewery that I like), at least this bottle was, and I don’t know why I’m surprised except that I just presumed that they had a brewery of their own.
The simple fact of the matter is that I don’t really care as their beer is almost unerringly brilliant, and this is another example.
Australia is a Pale Ale packed with Antipodean hops, so you get a feast of jelly sweets and pineapple, grapefruit and tangerine.
Underneath there’s a honey and lightly baked biscuit malt and the beer smells of passion fruit and honeysuckle.
No, I don’t care where Wiper & True make beer as long as they keep making it like this.