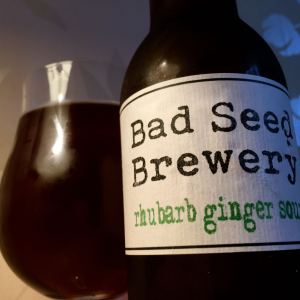 This isn’t just one of the best beers that I’ve had this year, it’s one of the best beers period.
And I realise what a bold statement that is, but Bad Seed’s Rhubarb Ginger Sour is beautifully balanced and absolutely delicious.
It pours a little flat but has just enough sparkle on your tongue to feel lively.
The aroma is rhubarb and custard sweets and as I took a sip I was transported back to my Gran’s kitchen as she served up my favourite winter pudding.
Lots of lovely crumbly pastry, vanilla custard, sharp rhubarb with a little brown sugar to take the edge off and a warming hit of stem ginger.
When Bad Seed first appeared on the scene I wrote enthusiastically about them as an exciting young brewery to watch out for, and with Rhubarb Ginger Sour they’ve truly come of age.