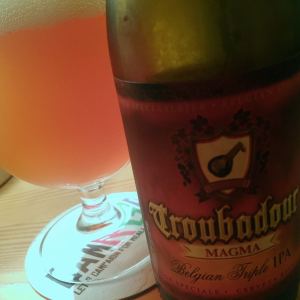 I don’t often review Belgian beer as generally so much has already been written about them, but I have to say something about this.
I bought it because I was told by David Martin (@rdgmartin)  that it is one of Chris Hall’s (@ChrisHallBeer) favourites, and he being a man of decent taste I thought it might be worth a go.
Troubadour Magma is a Belgian Triple IPA and it’s amazingly good.
A rich and creamy toffee and waffle malt glues itself to you and caresses you with soft honey kisses, and the hops prickle on your tongue with sharp hedgerow greenery and a big blob of orange marmalade that leads you to a long lip puckering finish while your nose is filled with bread dough and apricots.
Troubadour Magma is a rather special little beer.

One Response to Brouwerij The Musketeers Troubadour Magma (9%)