Last Wednesday I presented an Introduction To American Craft Beer at a lovely, and rather intriguing, little off licence just outside Sutton Coldfield.
The place is called Cellar Door and is run by Simon and Jen. 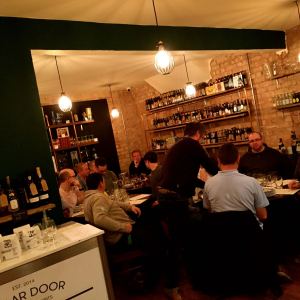 Not just an off licence, Cellar Door has a warm and friendly atmosphere.

Though it is officially an off licence it has tables and chairs and a couple of beer lines that allows people to taste products on site meaning that the atmosphere in the evening is actually more akin to a cosy and friendly little bistro than simply a place to buy bottles.
I arrived a little early so that I could have a chat with Simon and get a feel for the place which was warm and inviting in the cold dark autumn evening.
As we chatted we drank a half of Dark Star American Pale Ale that was on tap and people slowly started arriving.
The chaps from Backyard Brewery turned up and I had a good natter with them before everyone was shown to their seats.
I was co-presenting the evening with Mark and Ed of the American Craft Beer Co. and it was decided that their beer – the Steven’s Point range – would be slotted into the beer menu that I had chosen for the evening, giving us a running order of: 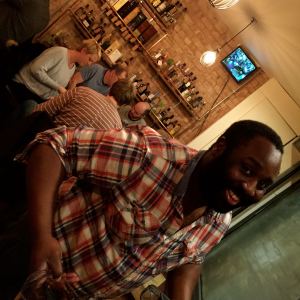 Simon serves up more amazing food while we talk beer.

While I, Mark and Ed told the story of American Craft Beer and gave pointers on flavour profiles and the like, the twenty or so paying customers ate the most amazing beef ribs, pulled pork and buffalo wings prepared by Jen who just happens to be a rather highly rated chef.
As the beer flowed our audience became more interactive and we had some good discussions and a lot of laughs.
I’m not sure everyone wen home with a brain full of knowledge about the subject we were there to talk about, but I do know that they went home buzzing with fun and laughter and some very good beer.
Thanks to everyone who came along and made it such an enjoyable evening, and thanks very much to Simon and Jen for inviting me to take part.
If you’re ever in the Sutton Coldfield area, go and visit Cellar Door as it’s a gem of a place.