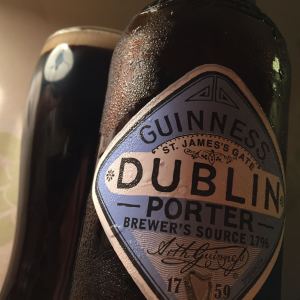 This is shocking.
I don’t care what Guinness say about their, “quest to explore new recipes,” or their rather fetching Arts & Crafts labelling, Dublin Porter tastes and feels like their West Indies Porter watered down by at least half.
It’s a thin and empty feeling, the aroma is a chocolate button in a pint of rain water, and the malts are weak and insipid, with an added and nasty chemical tinge.
Sure there’s some chocolate and toast, but it’s such a feeble excuse that it’s like a beer you half remember from weeks before, and even then it’s one you’re sure you didn’t enjoy.
Dear Guinness, why not take a note out of Adnams’ book and try and grab the Craft Beer dollar with some grace, with some well made products, rather than the enormous marketing drive I’m seeing in every bus shelter in the city that I work.