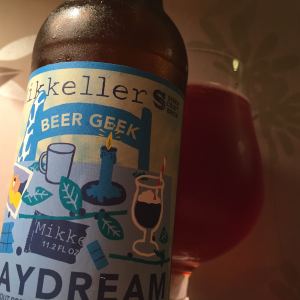 While I was drinking this it was my beer of the year, though I’ve still not entirely made my mind up.
That said, it is a brilliant piece of brewing.
Beer Geek Daydream is a White Stout with coffee, cocoa and vanilla that smells of white rum and spiced apricots and sits in my glass a glowing amber.
Once you take a sip you need to concentrate on what you have as it quickly becomes difficult to discern all the individual parts of this beer because the booze attacks your brains from the first swig.
Beer Geek Daydream is espresso and red chilli, chocolate and sticky vanilla pods, apple juice, redwood resin and pear flesh.
Occasionally you find a beer that is greater than the sum of its parts and you simply have to adore it.
Last year it was Wild Beer’s Schnoodlepip that did it, this year Beer Geek Daydream is that beer for me.
My beer of the year?
I just can’t decide.