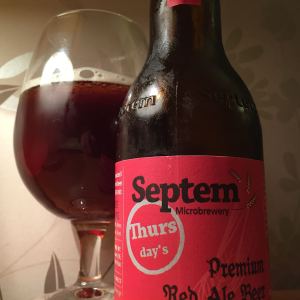 Greek beer.
This is my first Greek beer and it’s alright.
Not great, but alright.
This is a very malty beer, pouring a ruby red and smells of berries and All Bran, it’s full  of digestive biscuits covered in caramel, crunchy and sticky at the same time.
Personally I’d like more of a hop hit in here to counteract the sweet stickiness, as the Fuggles and Cascade give you a gentle liquorice root and hedgerow snap that’s just not enough to cut across the malts.
The result is a beer that becomes a little overbearing and cloying by halfway through.
As I say, it’s alright.