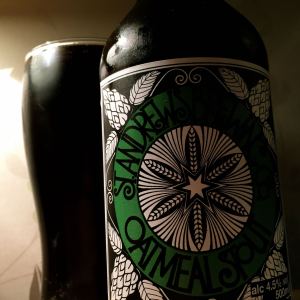 Correct me if I’m wrong, but I thought that the idea of an Oatmeal Stout was that it was thick and rich, whereas this one is a bit thin and limp.
It;s not helped by pouring almost entirely flat, giving it a really flaccid watery feel.
And that’s a shame because the flavours are really good.
Lots of coffee and toast, rum and raisin, chocolate, and some snappy redwood and green tea herbal hops.
There’s a nice cocoa powder dryness too, but it’s spoiled by the floppy watery nothingness of the body of what should be a big round satisfying stout.