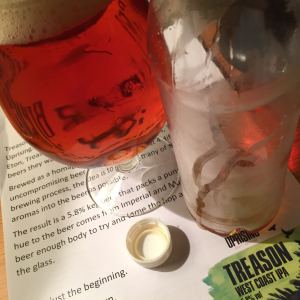 Treason is the first beer from Uprising, a new brewery based on the Windsor & Eton premises and run by Kieran Johnson, son of Windsor & Eton’s co-founder and Master Brewer, Paddy Johnson.
Treason is a West Coast IPA and I really like the fact that beer was sent to me in a twist cap bottle filled straight from a keg as it gives a good feel for how Uprising thinks.
They’re modern and playful and simply wanted to get their beer tasted and talked about.
And so it should be, because Treason is really good.
The aroma is fresh and fruity, full of jelly sweets and lime juice, the malting is caramel wafer and a pinch of sea salt, and the hops are sharp and prickly, snapping with sapling wood greenery, grapefruit skins and lemon juice, satsumas and pine.
All this makes for a finish that’s crisp and bitter and rather more-ish.
If Treason is anything to go by, Uprising is taking Windsor & Eton’s model for presenting us with well made modern beer styles and running with it.
I for one am looking forward to seeing where they go with it.