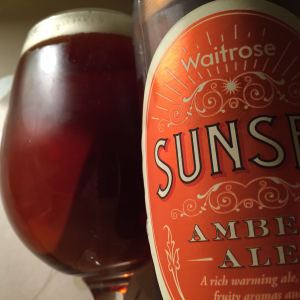 Waitrose are adding to their range of own label beer and this is the first of the new ones that I’ve found.
sadly, unlike their wheat beer, this is very disappointing.
Brewed by Marstons, it’s one of those beers that seems more water than flavour.
A damp toffee aroma gives way to a damp toffee malt, some digestive biscuits and nowhere near enough hops, just an insipid lemony hedgerow and little else.
As much as I think Waitrose offer the best high street beer range and have the most forward thinking buyers, Sunset is a limp excuse for a beer.

One Response to Waitrose Sunset (5%)