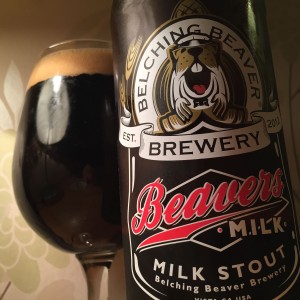 What is it with people not wanting to use apostrophes?
We won’t run out, you know.
But I’ll put my grammar pedantry to one side and tell you about the beer.
With its enormous creamy coffee aroma, this beer starts brilliantly.
Though that’s not to say that it ends badly, not at all.
Beavers Milk is a super Milk Stout that’s smooth and round and satisfying.
There’s lots of chocolate and coffee, biscuits, rum, sultanas and raisins.
And there’s some decent red and crunchy woodland leaf litter hops with a little redwood resin and a squeeze of grapefruit juice to freshen you up.
The finish is sticky with treacle tart and the bitter slap of espresso.
Super.