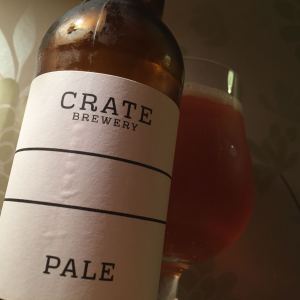 I’ll get straight to the point.
I dislike this beer as much as I thoroughly enjoyed Crate’s Lager, Stout and Best.
With barely any aroma at all, there’s a really harsh chemical tinge to the flavour.
It’s a dirty and acidic taste that wipes everything else out, and it’s a taste I remember from the original bottling run of the Killer Cat range (It has improved no end with subsequent bottles being bottle conditioned).
Interestingly this, unlike the other Crate beers I have tried, appears to have been filtered.
Could that have anything to do with it?
After all, I remember some time ago talking to the guys at Revolutions after they had bottled their first beer and they told me they were really unhappy by just how heavily filtered the contract bottler was, even saying they thought that the contractor was more intent on cleaning his gear than getting the beer right.
Could that be what’s happening here?
And that’s an honest question, as I’d really be interested in your thoughts on the subject, especially if you actually have an answer.
Anyway, the long and short of Crate’s Pale is that I poured it down the sink.