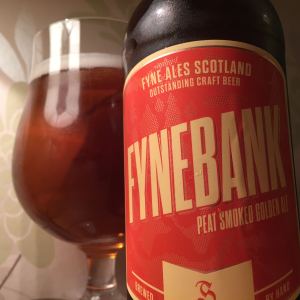 Fynebank is a Golden Ale aged in Springbank Whisky casks.
And it’s OK.
But that’s about the best I can say for it.
You see, everything’s very thin and a bit insipid, which I wouldn’t usually expect from an aged beer.
The aroma is toffee and damp wood, and taking a sip the flavour follows suit.
Everything feels damp.
Light toffee, some biscuits, and the damp woody thing that slowly works its way into a limp whisky tinged mushroom and herbal hedgerow ghost.
Generally I like Fyne very much, but I’m afraid that this is a very weak offering from them.

One Response to Fyne Ales Fynebank (4.6%)