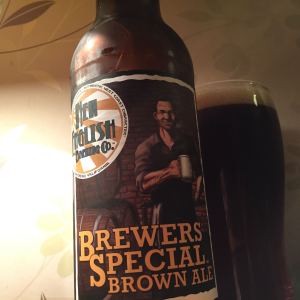 Fancy a massive nutty attack?
Fancy being to an old sideboard with sticky tamarind glue?
Then this beer’s for you.
Brewers Special (which sorely needs an apostrophe) is a massive varnished, nutty, tamarind beauty.
It’s a lovely chestnut brown and smells of toffee and pecans, the big alcohol presence warming the beer and amplifying the toffee, digestive biscuit, rum and raisin malt.
There’s a decent hop hit too, with lots of bitter pithy herbal leaves and a brown leaf litter crunch.
But this beer’s about its malts and its massive nutty and sticky tamarind varnished sideboard attack, and that’s alright by me.