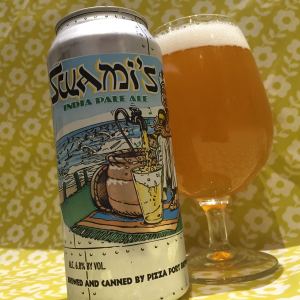 I refuse to believe that anyone could open a can that tastes and smells as good as this one and not be converted to the idea of canning beer rather than bottling it.
Swami’s IPA pours a pale gold and smells of pineapples and apricots, fresh cut flowers and pine sap.
It’s a big fresh enticing smell and it lures you in to a big and refreshing India Pale Ale.
The malting is caramel and ice cream cones, honey and white pepper, all round and creamy and solid, and the hopping is packed with pineapple and passion fruit, lemon zest and grapefruit pith and glued together with a sticky wood resin that ends in a finish that is superbly sharp and bitter and endlessly long.
Swami’s IPA is an absolute delight.