Posted on December 7, 2014 by Simon Williams 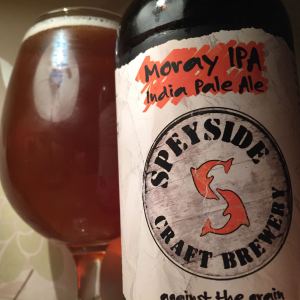 This is awful.
There’s a terrible Danish Blue thing lurking in here and it’s covered in dust and fag ash.
The aroma is a bit cheesy to, with just a hint of toffee weeping quietly to itself in a corner.
And there’s not a lot of hopping other than a light bracken and hedgerow snap.
Overall Moray IPA (and this is my second bottle) has an old musty feel, but not in an aged old beauty way, more a just-been-fondled-by-a-pensioner and feeling a bit grubby kind of way.
And then, right in the finish, in its dying breath, Moray IPA hands you a chemical tang to add to your disappointment.