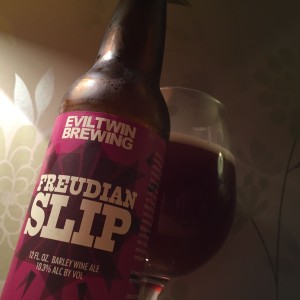 Freudian Slip is a Barley Wine and it’s enormous.
A huge toffee and rum smell singes your nasal hair as the beer slouches in your glass all amber and sticky.
It’s a bit tricky to discern malts from hops, instead Freudian Slip is a big ballsy beer attack that’s equal parts stinging nettles, brown bread, treacle, brandy, stewed peaches, white spirit and wood varnish.
This is a beer to drink slowly, to let yourself dissolve into.
A beer to drink while squinting.
It’s a dangerous beer and it’s a fabulous beer.