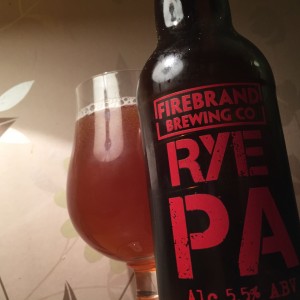 When I tried Firebrand’s IPA a few months ago I wasn’t overly impressed and the brewery put it down to bottling issues and filtering their beer, telling me that they would be bottle conditioning in the future.
Rye PA is bottle conditioned and tastes rather good.
But unfortunately it’s as flat as a pancake.
And that really is a shame as the aroma is a lovely fruit jelly sweet treat, and there’s a lovely sticky Soreen malt with a rich earthy edge from the rye, along with a good sharp sherbet lemon and orange rind hop that should give a bright crisp finish.
But the finish is let down by the flatness, making the beer feel thin and a bit lifeless.
While being a real step up from their bottled IPA (and trust me, I had four bottles and they were all the same), there’s still a little bit of work to be done.
Mind you, once they’ve got it right, this will be a damn fine little bottle of beer.