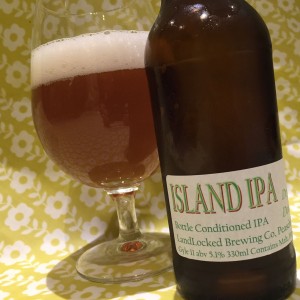 Brewed with Citra, this little bottle of IPA is part of a range that Landlocked are brewing using the same malt bill and different hops.
This one is Double Citra and it’s very nice, though it doesn’t taste entirely like Citra.
In fact there are some some definite Pacific Jade or Motueka flavours going on in here.
Yes there’s the zingy lemon hit and the grapefruit rind and nettle sting, but there’s also lots of round kiwi and peach along with a pile of satsumas and lime leaves.
And this is a good thing.
All of this is underpinned by a very nice light honey and ice cream cone malt.
And with a finish that’s long, bitter and crisp, this is a rather good little beer.