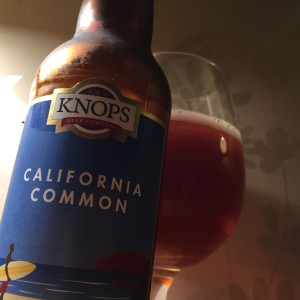 Last night I had two beers from The Knops Beer Company side by side.
They were the California Common, which alludes to being some kind of American steam beer, and Musselburgh Broke, which says that it’s a “Brisk and malty Scottish ale.”
Both of them were very nice, very drinkable.
But both of them were almost exactly the same.
The differences were so slight that I found it difficult to tell them apart other than the Musselburgh Broke had a slightly heavier biscuit in the malts, but even that may have been psychosomatic.
Both smelled of honey coated almonds and peaches, and both were a deep amber colour (one, by shades, darker than the other). 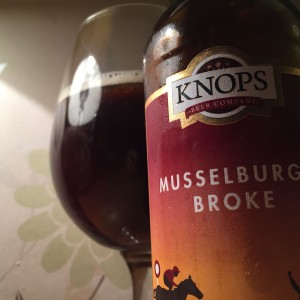 The malting in both was biscuits and candy canes, honey and brown bread.
And both had hops that were leafy and crunchy, more autumnal brown than fresh and green, with crunchy leaf litter and hazelnuts, with a nettle sting and a lemon twist all glued together with maple syrup.
All this leads to a bitter sweet sticky finish.
I like both these beers and I’ll happily drink them again, but I’m going to make sure in future that I keep them well apart.