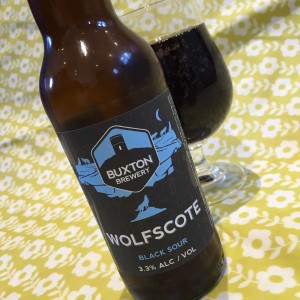 Wolfscote is a Sour Mild brewed without any hops.
Yes, you read that right.
Brewed without any hops.
I know, it makes me feel a bit uneasy too.
I’m joking of course – though not about the lack of hops – as Wolfscote is plenty sharp and bitter enough without them.
The aroma is chocolate and fudge and so you wouldn’t know this was a sour beer if you were handed a glass and not told.
Until you took a mouthful and your teeth curled back and your lips retracted and then you’d realise what you’d got.
You can still taste the soft malty chocolate biscuits and a hint of black cherry fruitiness, but everything is presented under a wave of shiny sour bitterness that’s fresh and clean and rather refreshing.
And no hops.