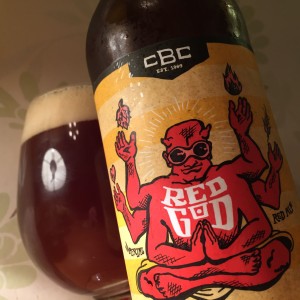 This might have been bottled in 2012 which, for a hop heavy beer, might be a little bit less than fresh, but whatever Red God was originally meant to be, it has become a very good malty beer.
The aroma is boozy peaches and sandalwood and as you take a swig you find tamarind and toast, honey, truffle oil and walnuts.
The hopping is no longer fresh and sharp, but instead it’s immensely sticky and resinous, redwood and pine needles, orange marmalade and coal tar soap.
A treacle gloopiness glues itself to you and there’ a distinct boozy heat that makes the finish big and bold and oozing with brown sugar.
Red God, Cambridge’s Imperial Red Ale is very good.
Now I’d like to find a fresh bottle to compare.