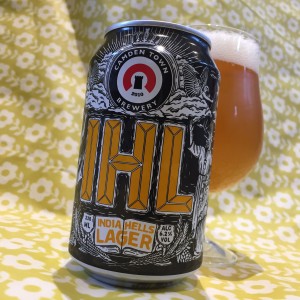 India Hells Lager.
What’s all the fuss about?
From the shock and awe I seemed to get on Twitter yesterday when I said I didn’t think much of this beer, it would appear that I am one of very few people who don’t worship at the altar of Camden Town Brewery.
Don’t get me wrong, this beer is OK, and for what it’s worth it’s better than most other Camden Town beers.
It’s beautifully presented too, but then the brewery’s whole range is well dressed.
But there’s something really one dimensional about Camden Town Brewery for me, and it’s evident here too.
Yes, you get a big floral hoppy grapefruit hit, but there’s only the merest gasp of anything malty which makes the body feel a bit thin – even under the weight of the alcohol – and leaves the hops to become overly harsh, scorching away at your tastebuds without any real depth.
I mean, I like my hops, but there’s not enough balance here and the result is a finish that is hyper bitter and bordering on a chemical burn rather than hoppy freshness.
As a consequence I could detect none of the flavours I might have expected to find from a lagered beer, no creaminess, no spice, just nothing.
Maybe it’s just me?