Posted on February 3, 2015 by Simon Williams 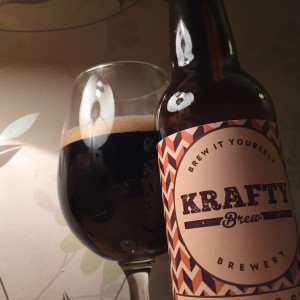 Krafty Brew is a “Brew It Yourself” brewery, a brewery that you can basically rent out.
At least that’s how it appears from their website.
And therein lies a small problem.
Because not everyone will brew beer well, like with everything else, it takes some skill and knowledge.
It’s fine hiring a brewery and making something for yourself and/or your friends, but when that product can end up on sale in the wider world you may want to have more quality control than this business model seems to allow for.
Take this Chocolate Stout for example.
It’s my first beer from Krafty Brew and it has single-handedly put me off trying any more.
There’s no aroma to speak of save for the thinnest chocolate and cigarette ends.
And instead of the big round chocolate, toffee and biscuits that you’d expect from a Stout, you get a watery and flaccid, slightly sour bran flake thing that’s just so limp it’s pitiful.
Brew it yourself?
Fine.
But some things need keeping to yourself.