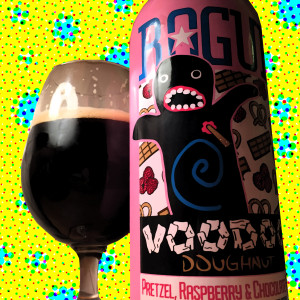 I’m late to the party, I realise that.
Really late.
But I’ve wanted to try one of Rogues collaborations with Voodoo Doughnut for what feels like forever, and now I finally have I have to say that it has been well worth the wait.
This is a silly beer, a ridiculous beer, a big fat fun beer to put a smile on your face, to not be taken seriously but to be enjoyed.
It pours a deep dark brown and smells of salty chocolate and raspberries.
And taking a swig i a delight.
This beer is raspberry ice cream, chocolate, salty biscuits and a bit more chocolate.
There’s a creaminess to the feel that really adds to the ice cream sundae big kids’ treat that this beer is.
There’s a nice roast nut and digestive biscuit background too, and just a light snap of hoppy bitterness to the finish that, along with the salty edges stops the beer being too sweet.
Though it’s pretty sweet all the same.
I may have been late to the party, but it was a damned good party nonetheless.