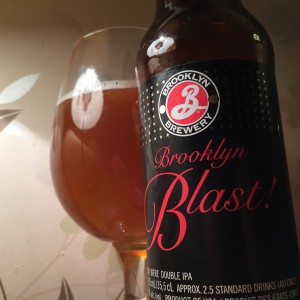 I first had this on keg a few weeks ago and I think I enjoyed it, though I’d had several before it, including nearly a pint of 10% Kernel Porter, so my memory is a little bit sketchy.
Brooklyn Blast! is a Double IPA that pours a rich amber and smells of pineapple and rum and jelly sweets.
The malting is sticky toffee and digestive biscuits, nothing extraordinary but decent nonetheless, and the hops are big and bold and full of mango and orange rind, apricots and lime.
There’ a good long bitter finish tempered by sticky pine resin too.
All in all, not too shabby.