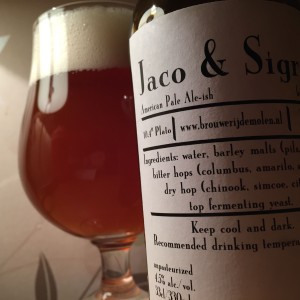 You can taste the class.
Really, you can.
There’s just something that De Molen do that tastes and feels that much better than most other breweries.
I can’t even tell you exactly what it is.
This, after all, is just a basic Pale Ale with Columbus, Amarillo and Sladek hops and then Chinook, Simcoe and Citra for dry hopping.
The malts are round, creamy fudge and biscuits, and the hops are woody and brittle, zingy and zippy with herbs and citrus.
Maybe it’s De Molen’s yeast that adds a warm plump earthiness that makes their beer feel so much different.
Or maybe it’s just that De Molen are magicians.
Whatever it is, Jaco & Sigrid is beautiful.