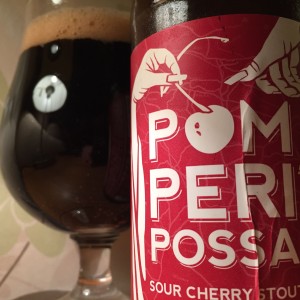 Brewed in collaboration with Omnipollo, this is a sour cherry Stout, except it’s not that sour.
In fact it’s barely sour at all.
Not that that’s a problem at all, it’s just I was expecting sour a la Lambic and this isn’t.
Instead, this is what you find.
The aroma is morello cherry and chocolate, and taking a swig you get thick chocolate and coffee followed by a juicy black cherry bitter sweetness.
There’s a hint of Vimto and some decent autumnal red leafy hops too.
Pomperipossa is very nice indeed, it’s just not what I thought I was going to get.