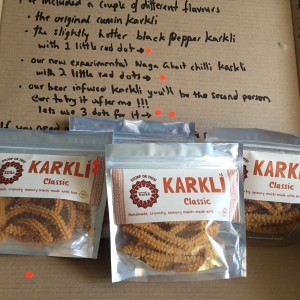 Looking for something a little bit different to munch on while drinking your beer?
Karkli is a spicy Indian snack made with lentils and, it would seem, magic.
I was kindly sent a few flavours to try by Kumar at Karkli in Yorkshire.
He’s been showing his wares around events like IMBC and Birmingham Cubed and getting a lot of very good feedback from them, and so I was looking forward to them immensely.
I started with the basic cumin flavoured pack.
Karkli is made in little spiky sticks that make them feel good to eat as well as tasting great.
It was warm, slightly oily in a very appetising way, and gently spiced.
More importantly, it went really well with my pint of Fullers London Porter (5.4%), adding a piquant bite to the smooth chocolate of the beer. 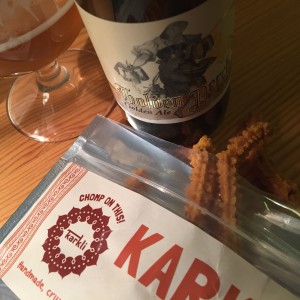 The black pepper version  adds a earthy heat to the mix and worked well with my bottle of Yeastie Boys Golden Perch (4.4%).
The third version I tried was a special made with beer and it was a strange delight.
There was the spicy indian warmth, but also a round maltiness which initially seemed a bit weird, but became increasingly tasty as I went on.
The fourth and final Karkli flavour I tried was my favourite.
Made with Naga Ghost chillies, it’s absolutely mental, the chilli heat coming on slowly but building into a face melting, brain numbing beast that isn’t for the feint hearted.
I loved it, but it makes no difference what beer you drink with it as you’re unable to feel your tongue.
It’s an intensely satisfying experience, and one I recommend you try if you find Karkli on sale in your local pub or at your next beer festival.

Thanks to Kumar (@chomponkarkli) for kindly sending me some samples to write about.