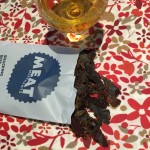 Those of you who know me, those of you who read this blog regularly, know that I will be as honest as I possibly can about the beer that I review.
Why am I saying this?
Well, I was recently sent a range of snacks to try from a new company called Meat Merchants and I want to tell you about them.
The thing is they were freebies and they were really very good, so you’ll just have to believe me when I say that this is not an advertisement and if the snacks were rotten I’d have said that too. 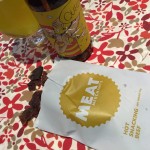 Meat Merchants have produced four little packs of meaty treats to go with beer, two billtongs, one with chilli, one without, bite sized salami and bite sized chorizo.
All of them made by small specialist producers and packed in cool little bags.
The Snacking Beef is rich and meaty and fresh, a lovely seasoned roast beef flavour coming through as you chew, and the Hot Snacking Beef gives an extra kick of chilli heat to the beef that went really well with the Beavertown Quelle Saison (4.1%) that I’d opened. 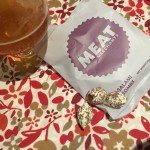 I tried the Salami Bombs with a Harbour Double IPA No. 4 (7.2%), and they went down a treat, produced in France they’re little balls of salted porky goodness.
But best of all were the Chorizo Bombs, they were spicy and hot, earthy with paprika, rich and meaty little bitesized torpedo shaped treats that went brilliantly with the great big Urthel Hop-It (9.5%) that I’d just opened.
I hope these new snacks do well, they’re a great idea and something I would want to see in my favourite watering hole. 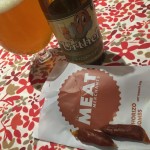 Meat and beer, beer and meat, my only criticism would be that, unless these were specially designed packs for review, there wasn’t enough in each bag, but that’s probably only because I’m a greedy guts when it comes to good meat products.
Meat Merchants are currently selling wholesale, so let’s hope they start popping up in all our local boozers really soon.

*Thanks very much to the chaps at Meat Merchants for kindly sending me their products to try.