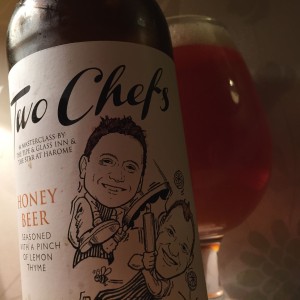 There’s a lot of honey in this.
Supposedly there’s, “A pinch of lemon thyme,” too, though I can’t find it.
As it goes this isn’t a bad beer, at least to begin with, though it’s immediately rather sweet.
There’s a honey and spun sugar aroma, and that’s pretty much where the flavour begins and ends.
You do get a bit of biscuit and some raisins from the malts, and a lightly spiky hedgerow bitterness from the hops, but in actual fact, what begins as drinkable if a little sweet becomes, by halfway down the glass, overly sugary to the point of sickly, and I ended up finding it hard to finish.