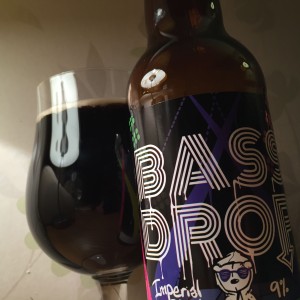 Bass Drop is Tiny Rebel’s Imperial Stout and it’s alright.
Not better than alright, but alright.
It pours a deep dark purple brown and smells of stewed fruit.
There’s a decent enough red fruit, treacle and walnut bread malt, and the hops are brown and orange and crunchy and brittle.
But the body is surprisingly thin, rather watery in fact, and as a result everything you expect to hang around, to glue itself to you, disappears rather quickly.
And that’s not what I want in an Imperial Stout.